This volume explores the proliferation of contemporary art that uses sequences of images to investigate ideas of space, time, movement and duration. Etienne-Jules Marey, Eadweard Muybridge and other ‘chronophotographers’ first explored these ideas at the turn of the nineteenth century; since then chronophotography has been in the shadow of cinema, but now it’s emerging once again in post-cinema practices, digital art and new experimental photography. At the beginning of the twenty-first century, artists have found that sequences offer new opportunities for exploring continuing issues regarding aesthetics that operate at the intersection of time and space. The book contains a number of illustrated essays by international critics and theorists and discusses the work of a wide range of artists engaged in contemporary chronophotography. The introduction also uses insights from chronophotography to dispel the myth of persistence of vision.

The author / editor:
Paul St George is a London-based artist and curator and is Principal Lecturer in Computer Animation at London Metropolitan University. He was also the artist behind the Telectroscope, a recent public art project (22 May – 15 June 2008) connecting Brooklyn Bridge, New York and Tower Bridge, London via a special transatlantic tunnel and optical device.

Sequences includes a 28-page chapter by Marta Braun,  Chronophotography: Photographing Movement, which touches on Muybridge’s contribution, with small reproductions of several Muybridge image sequences. A full review of this interesting and attractive book will appear on The Compleat Muybridge website at a later date.

I have to declare an interest in this book, as I was responsible for helping to shape an earlier draft, which later evolved into the version now published by Wallflower.

Now back to The Compleat Muybridge.

Silver! An unmissable opportunity was presented to Britain’s investors in 1865, with an advertisement in The Times (London):

The Directors of this venture were: The Hon. FREEMAN H. Morse, United States Consul for London, Chairman…. and six others including one Edwd. J. Muybridge, Esq. (late of California), 4, Brompton-square.

This Company has been established, firstly, for the purchase and working four of the most valuable silver mining properties at Austin, the chief city of the Reese River District of Nevada, California, viz.:- The Silver Star, Sunnyside, Idle Wild, and Lizzie Hopkins: possessing altogether 2,633 feet of lodes. The second purpose was to establish stamp quartz mills (mills in which ore was crushed) at Austin. It is now admitted by the best authorities on the subject that the Reese River Mines are the richest in silver that have yet been discovered, …Eleven shafts have been sunk in the several lodes, so that the Company’s mines are completely proved and tested. [The Times 1 July 1865]

In The Times Money article on the 6th inst., it is stated that there are no known silver mines, excepting those of Mexico (many of which are quite worked out), which do not sink into insignificance alongside of the enormous deposits of silver sulphurets in Nevada.

On July 7th, Notice was given in The Times that the List for Applications for Shares would be closed ten days later. If the call for investors was successful, the directors and shareholders would have anticipated quick and serious profits. On 14 November The Times noted:

“The Committee of the Stock-Exchange have appointed Friday next a special settling day in the shares of the Austin Consolidated Silver Mines Company, which are not to be marked in the official list.” [p.6]

But as with the Bank of Turkey, all did not go well. One modern account describes what happened at the mines:

Sometimes the rush was rewarded by actual prizes, but commonly the movement and dispersion were rocket-like – a prolonged whir, a gleaming beacon, a moment of splendor at the centre of radiant stars, and then dwindling specks of glory succeeded by gloom and utter extinction. The Reese River district … was not such a treasure-trove as its explorers fancied…’ [Minerals of Nevada by Stephen B. Castor, Gregory C. Ferdock, p.16]

On 10th July 1866, less than a year after the call for investors, a notice appeared in The London Gazette:

The following week, the same journal announced that all creditors were to send in particulars of their debts or claims before 17th August, to the Liquidator. So, as with the Bank of Turkey fiasco just a few weeks earlier – which we now know happened during a major UK bank crash, the biggest until Northern Rock – Muybridge chaired the final meeting. Quite how he found himself in this situation in both cases will perhaps remain a mystery, but it suggests that he was not one to walk away from his responsibilities until he had faced those who had trusted in the ventures in which he was a director. It seems likely that this second failed investment venture was the cause of Muybridge’s decision to leave England and return to San Francisco, where he would re-invent himself once again, this time as a photographer. 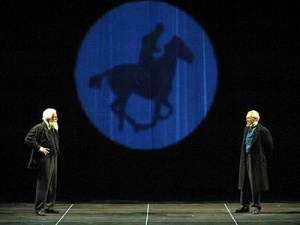 The current production of Studies in Motion: the Hauntings of Eadweard Muybridge has been receiving appreciative reviews – and a new trailer is now online.

Reviews at Plank magazine and on various blogs, including this one, 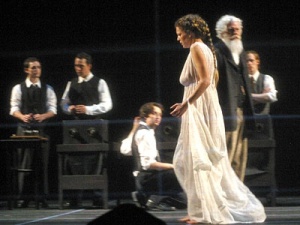 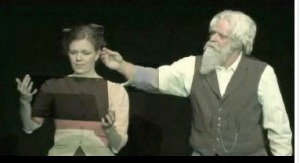 With luck, the trailer may still be accessible.

[Back to The Compleat Muybridge]

Painting by Darren Waterston, based on a Muybridge photograph

As reported back in January the Cantor Arts Center at Stanford University presents “Splendid Grief: Darren Waterston and the Afterlife of Leland Stanford Jr.,” on view from April 15 through July 5, 2009.

Leland Stanford is a hugely important figure in the life of Eadweard Muybridge, and the Stanfords were devoted to their son.

Collared in lace and cultivated by tutors, the young heir to the Stanford fortune had his own pony and a pint-size train that ran on a 400-foot track from the family’s Palo Alto house to the stables. As a teenager, he rubbed elbows with senators, generals and Supreme Court justices and traveled with his family by rail across much of the United States and Europe. Encouraged by his parents, he developed a small museum on the third floor of the family’s San Francisco mansion to house the curiosities collected during his adventures. (Theresa Johnston)

Leland Jr. caught typhoid two months before his sixteenth birthday, while on a Grand Tour of Europe. He originally fell ill in what was then Constantinople; though his family rushed him to Florence, Italy, for medical treatment under Catholic nuns, he died shortly thereafter. After they returned to the United States, his parents devoted their fortune to a memorial, Leland Stanford Junior University, in his honor. It is said that Leland Stanford Sr. was told in a dream that the “children of California will now be his children” and that was why he started the university. He is interred beside his parents at the Stanford family mausoleum on the Stanford campus. After the death of his father on June 21, 1893, his mother guided the development of the university until her death on February 28, 1905.

A detailed article about Leland Jnr is online at the Stanford Magazine.

“Despite their reputation for emotional restraint, Victorians indulged in complex and elaborate rituals surrounding death and mourning,” said Hilarie Faberman, the Center’s curator of modern and contemporary art. “The Stanfords’ immense loss became the impetus for several commissioned monuments and works of art that perpetuated their son’s memory. One of these splendid memorials was the Leland Stanford Jr. Museum that was founded at the same time as the university that bears young Stanford’s name. ‘Splendid Grief’ examines the Stanford Family’s elaborate displays of sorrow seen through the eyes of contemporary painter and installation artist Darren Waterston.”

Waterston transforms the Ruth Levison Halperin Gallery into a mourning parlor that serves as a memento mori to the late Leland Jr. This installation includes objects from the museum’s collection dealing with Leland’s short life, such as Eadweard Muybridge’s photograph “Leland Jr. on His Pony.” In addition, the installation features artifacts from the Stanford Family lent by the university library’s special collections that concern the life and death of little Leland. The art works and artifacts were chosen based on Waterston’s research and the guidance of the Cantor Art Center curators, staff, and university historians and archivists.

Waterston created eight large paintings dealing with spirituality and the afterlife that are integrated into the mourning parlor. The installation creates a dialogue between those 19th-century objects, which reflect the cult of grief, and the new paintings that are inspired by them. A film dealing with the Stanford Family and little Leland’s legacy by Stanford University MFA documentary film graduate students Mike Attie and Melanie Vi Levy accompanies the exhibition.

This exhibition is made possible by support from the Halperin Exhibitions Fund, the Bill and Jean Lane Fund, and the Geballe Fund for Academic Initiatives.

VISITOR INFORMATION: Cantor Arts Center is open Wednesday – Sunday, 11 am – 5 pm, Thursday until 8 pm. Admission is free. The Center is located on the Stanford campus, off Palm Drive at Museum Way.

Darren Waterston was born in California in 1965 and received his BFA at the Otis Art Institute in Los Angeles. He continued his training in Germany. He has previously been the recipient of the Richard C. Diebenkorn Teaching Fellowship at the San Francisco Art Institute, and the Civitella Ranieri Foundation Fellowship in Umbertide, Italy, where he was an artist in residence in 2005. Waterston lives and works in San Francisco, California. His paintings, watercolors and murals have been exhibited internationally and are included in many permanent collections.

This portrait of Muybridge is from the collection of the Museum of Fine Arts, Boston. It was acquired in 1991. I have never seen this image in print. The catalogue details are as follows:

[Note: This image is copyright Museum of Fine Arts, Boston. Reproduced here for educational/personal use.]

For more studio portraits of Muybridge see my PORTRAITS webpage. 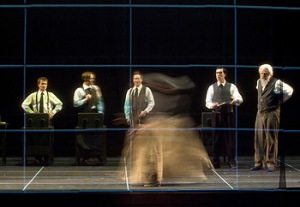 The new production of Studies in Motion has had variable reviews, but most are enthusiastic.

For all its eye-catching, technological achievements, the remounted Studies in Motion now comes with a clearer plot and more humanity..

The result is a beautifully polished show.

With this production, both Collier and Kerr have increased their already substantial reputations as director and writer respectively. Collier masterfully integrates all the technical elements–and they are substantial–with Kerr’s reworked script. It’s almost as much visual art and dance as it is theatre. Kerr’s offbeat humour comes through but never dominates. Everything is held in a spellbinding balance. And while Muybridge never becomes an entirely sympathetic character, he makes a gesture of such self-sacrifice that Studies in Motion transcends the cool, scientific exploration of a man’s passion for science to the study of a man, past mid-life, making an emotional breakthrough.

Electric Company Theatre can be very proud of this production; it should be seen all across the country not just Calgary and Montreal where it’s going next. Given this second chance, Studies in Motion is ready for stages worldwide.

Read more about the play here