Review of “Helios: Eadweard Muybridge in a Time of Change” at the Corcoran
By Blake Gopnik
Washington Post Staff Writer
Friday, April 9, 2010; 12:00 PM

“Helios: Eadweard Muybridge in a Time of Change,” a show that opens Saturday at the Corcoran — it’s one of the gallery’s most significant events in years — is full of fabulous art that’s a pleasure to see. The very best of this work, the celebrated action shots of animals and people that Muybridge took in the 1880s, also raises an intriguing question: Who should take credit for it?

Visitors who came to the Corcoran Gallery of Art on Thursday expecting to see the exhibition “Turner to Cézanne: Masterpieces From the Davies Collection, National Museum Wales” got two surprises. First, the exhibition was closed. Second, to make up for the sudden closure, the Corcoran waived its usual admission fees.

“We are trying to satisfy those who came by offering free admission,” said Kristin Guiter, the gallery’s director of public relations. The no-charge policy continues Friday. On Saturday, the museum will charge its regular fee. (Admission to the gallery is usually $8 to $10, with children younger than 12 free.) And Sunday was already scheduled as a free day with a full slate of family activities.

The decision to shutter the show before its April 25 closing date was made late Tuesday night because of malfunctioning air handlers and a notification from the General Services Administration that it was temporarily shutting its steam system in parts of downtown this weekend.

The remainder of the air-handling systems in the Corcoran were not affected by the malfunctions in the three galleries, Guiter said, and the Corcoran is planning to open “Helios: Eadweard Muybridge in a Time of Change” as scheduled Saturday.

Preview: Eadweard Muybridge @ The Corcoran
April 9, 2010 by Francis Chung
While it doesn’t break any entirely new scholarly ground on Muybridge’s already well-studied oeuvre, the Corcoran show effectively conveys the considerable breadth of the photographer’s output, with ample attention paid to his less-renowned early efforts.  A British-born immigrant to the United States, Muybridge started out as a landscape photographer in the American West, for a time publishing his work under the pseudonym “Helios.”  The pantheistic connotations of this moniker underscore the Romantic tendencies of the dramatic, sometimes stunningly beautiful images Muybridge captured at locations such as Yosemite Valley, Alaska, and the Pacific coastline.

Helios: Eadweard Muybridge in a Time of Change is on view at the Corcoran Gallery of Art from April 10 to July 18, 2010. 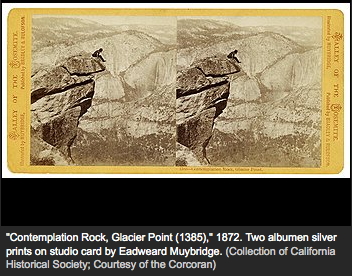 What is Muy Blog?