In the early 1890s, Muybridge contributed to the first edition of Funk & Wagnalls’ Standard Dictionary of the English Language, one of the great American dictionaries. His presentation copy of the two-volume work, with a handwritten dedication by Isaac Kaufmann Funk, was kept by the Lawrence-Smith household at Park View, Kingston, where Muybridge was living until his death in 1904.

The family’s maid Nellie Sawyer was just 14 years old when she started employment in the household c.1902 and continued as cook, housekeeper and nurse until lastly Miss Katy died and Nellie retained the Dictionary. Her great nephews David and Roger Prince regularly visited their elderly aunt, and there was often talk of Mr Lawrence, Miss Katy (Catherine Plow Smith), Mr Muybridge, and Park View. The Dictionary passed to their mother in 1966-67, and the family generously donated the set to Kingston Museum in 1998. 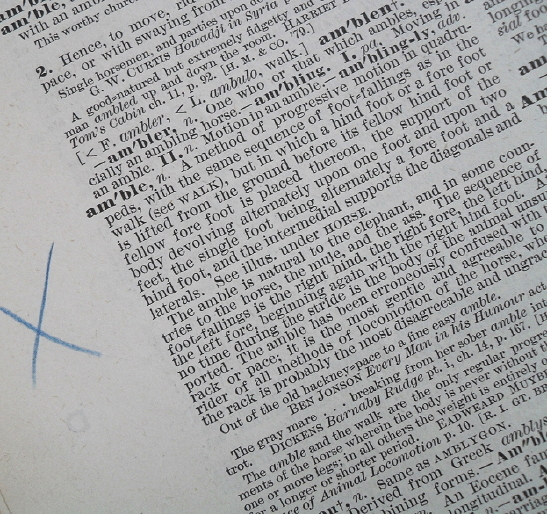 Muybridge had been given the task of writing entries relating to Animal Locomotion; yet another indication that Muybridge’s own scientific analysis of his photographic sequences has been used for texts in authoritative reference works. (So, doubters – ‘Go look that up in your Funk & Wagnalls’, as they used to say on Laugh-In.) Entries included line drawings based on the photo sequences.

Nature [Vol.50 p.146] noted: “…Prof. Huxley has had evolution under his care; Dr. P.T. Mason, anthropology, and Mr. E. Muybridge, animal locomotion. These are only a few of the names of men of science who have helped…”

A reference work, Farm Live Stock of Great Britain by Robert Wallace (probably the 1893 edition), used six examples of the drawings from Funk & Wagnalls, from “advance sheets of the Standard Dictionary”, which was then still in preparation. Muybridge also “revised and corrected the letterpress”.

Thank you Nellie May Sawyer, for keeping the Dictionary safe for so many years, and thank you to David Prince for kindly supplying information provided in this post, and to Peta Cook and Jill Lamb of Kingston Museum and Heritage Service.