The Steam Powered Improved Zoetrope or “L’ Affirmatrope” is created and built by my old friend Professor George Hall, the Wizard of Zoe, who also happens to be the eBay seller.

“The improvement to the classical Zoetrope which was invented in 1834, is that the slots on the drum are made full length by slats attached to a 13 faceted floor, rather than the usual construction of half-length slots that are cut into a round drum. This design allows the entire set of images on the floor to be seen when no strip is inside.

The reason I have named this invention “L’ Affirmatrope” is because messages of Affirmations on the floors can move freely from the moving images to the sub-conscious mind of the viewer. You can also view Crop Circles through the Fibonacci Frequency of 13 or watch Mandalas come to life.

Or…. you can just enjoy the machine as a Zoetrope with the historic strips and floors provided and not worry about all that New Age stuff. The steam engine is a used Wilesco D6 that comes with the original box….

There are reproductions of 8 historic strips and 4 photographic strips, three of which are based on the work of Eadweard Muybridge. There are also 6 double sided historic floors and 8 more of Crop Circles, Affirmations and Magnetic Mandalas I have created. I am even including a copy of my 44 page “Zoetrope Renaissance” booklet that tell all about the history of the Zoetrope.”

No one in the world knows more about how Zoetropes work and the intricacies of their animated designs, than the ‘Professor’.

The release of the app celebrates the opening of a major exhibition of Muybridge s work at Tate Britain (8 September 2010 16 January 2011). The Muybridgizer freeze-frames the moving world, just as Muybridge did with subjects ranging from running horses to leapfrogging boys. 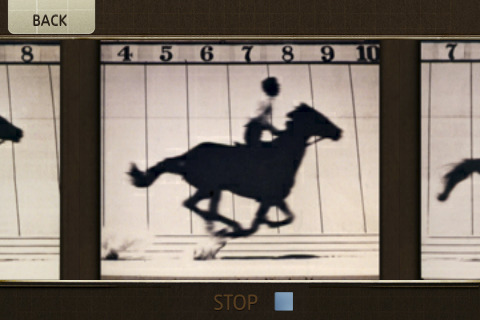 In homage to the analogue Victorian beauty of the originals, users can Muybridge-ize their frames with grids and sepia tones, transforming their moving images into striking vintage-style pictures. The application is offered free for a limited period.”

“It seems to just rapidly take a series of pictures, but it’s a pretty well done app all the same. I like the effect – nice and retro. and within the app – you can swipe to animate both forwards and backwards.”

“It’s a good app. Pretty well done by the Tate. Maximum resolution is 1080x810px, which is more than suitable for sharing online on your blog, Facebook or Flickr. It’s as good as several commercial apps that do less and cost a buck or two. A good download for free.”

There’s a growing batch of examples on The Muybridgizer group on Flickr:
http://www.flickr.com/groups/muybridgizer/