The Muybridge in Kingston project is currently inescapable in the old photographer’s home town. The Muybridge Revolutions exhibition (original lantern slides and motion discs) at the Museum continues until 12 February, with ongoing lectures. 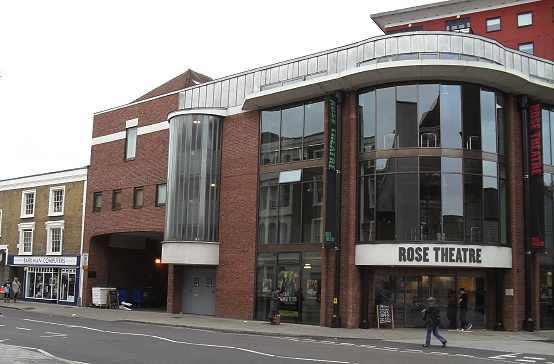 Barkman Computers in the High Street – Muybridge’s childhood home, just across the street from the Coronation Stone – has a large window display, and in the Rose Theatre next door some of Trevor Appleson’s large colour photographs of human movement/activity are being shown. In the evenings, there are spectacular Nocturnal Projections (18 Sept – 11 Feb).

A few yards down the road at the Market Square, the ancient Market House recently housed a display of local children’s artwork inspired by the old photographer’s sequences of people in motion. As well as single-phase drawings of people in motion and photo-sequences for animating in mini cardboard zoetropes, the children made their own versions of the commemorative plaque that’s on Muybridge’s original house, with details of how they would like to be remembered – from the inevitable “league footballer” to “auther”. (More about the children’s work in a later post.) 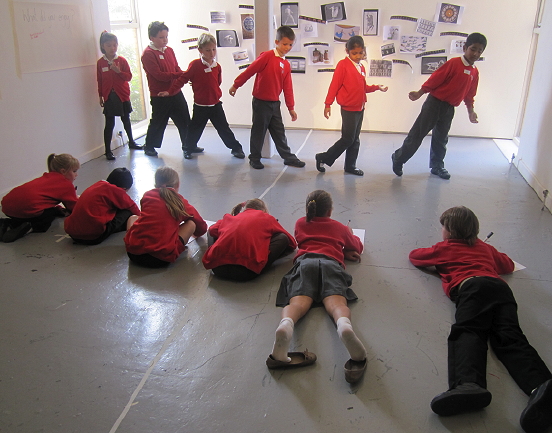 This artwork was also in one of the rooms at the Stanley Picker Gallery.

Also at the Stanley Picker, is Appleson’s Dance of Ordinariness – “an ambitious new moving-image and photographic work inspired by Muybridge’s famous collotype sequences of human figures. As part of a residency at The London Contemporary Dance School, the artist has invited dancers to reinterpret gestures and actions that relate to the various visual narratives that Muybridge himself built into his original motion studies”. The multi-screen presentation echoes the multiple-view format of the Animal Locomotion plates. One sequence shows water flowing from a mop in slow motion – the effect half-way between Muybridge’s time-frozen water in a similar scene, and watching this happen in real time –  allowing us to see (as in Muybridge’s published collotype sequence) the detail in the water’s movement, at the same time that the synthesized motion is being presented.
http://www.stanleypickergallery.org/index_more.htm

The exhibition runs until 13 November, with Becky Beasley’s exhibition following from 24 November.