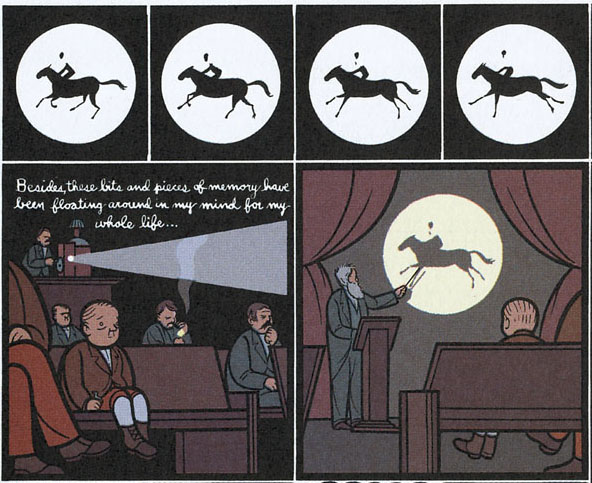 Now here’s something I missed a long time ago, and shouldn’t have. A graphic novel representation of Muybridge and his Zoopraxographical Hall at the 1893 World’s Fair, in Jimmy Corrigan, the Smartest Kid on Earth, a graphic novel  written and illustrated by Chris Ware. (Pantheon Books 2000)

Wikipedia tell us: “The story was previously serialized in the pages of Ware’s comic book Acme Novelty Library, between 1995 and 2000 and previous to that, in the alternative Chicago weekly New City.

Plot summary
Jimmy Corrigan is a meek, lonely middle aged man who meets his father for the first time in a Michigan town over Thanksgiving weekend. Jimmy is an awkward and cheerless character with an overbearing mother and a very limited social life. Jimmy attempts to escape his unhappiness via an active imagination that gets him into awkward situations. A parallel story set in the Chicago World’s Columbian Exposition of 1893 shows Jimmy’s grandfather as a lonely little boy and his difficult relationship with an abusive father, Jimmy’s great grandfather. Another storyline shows Jimmy as a lonesome child of divorce, suggesting that this was Jimmy’s “real” childhood, while his “Smartest Kid on Earth” adventures are probably his fantasies.”

I have a sheaf of Chris Ware’s Acme Novelty Library comics still lying in a plan chest here, collected in the late 90s when I still maintained some knowledge of what was going on in the worlds of comics. I was very keen on Jimmy Corrigan, but certainly didn’t see the Muybridge pages.

One of the Jimmy Corrigan ‘Acme Novelty’ books

Another web site tells us: “Chris Ware was born in 1967 and his hugely popular Jimmy Corrigan was awarded The Guardian First Book Award in 2001. Although it originally appeared as a syndicated newspaper strip in London from 1993 to 1999, US author and artist Ware conceived it, from the outset, as a lengthy narrative.

The work, published by Jonathan Cape, combines innovative comic book art, hand lettering and graphic design to tell the story of Jimmy Corrigan, a boy with the face of a disappointed old man, and his relationship with his absent father.

Ware has stated that he drew inspiration from ‘original advertising drawings done for a depression-era Chicago cosmetics firm where all the typography was hand-done with a brush and white ink.’” 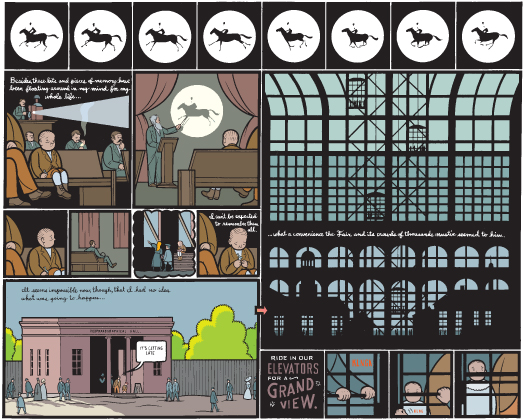 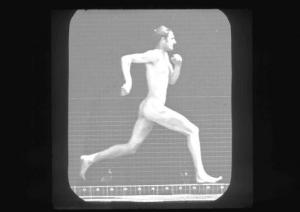 The following is from This is Local London. A review and photos will follow.

The exhibition will be at Kingston Museum from 28th July.

In the Olympic year Kingston Museum is exploring old and new techniques used to capture athletes in motion.
The exhibition will demonstrate the way artists and photographers have changed and evolved and how they depict the human body over time. The showcase includes work by Kingston-born, Victorian photographer Eadweard Muybridge, who bequeathed his personal collection to the borough in 1904 and paved the way for capturing the world in motion. He was a pioneer in trying to capture motion in sequence photography and the exhibition displays many of his 1887 experiments of humans and animals in motion. Much of his work was devoted to athletics and the male physical form, reflecting a new emphasis on physical fitness and ideals of masculinity in the 19th century.

In contrast, the display also includes contemporary artist David Michalek’s work, which captures athletes in motion in high definition. Coinciding with the 2012 Games the exhibition also focuses on 21st century techniques, including the use of sport biomechanics to measure and correct technique and injury rehabilitation. A video by Charlie Murphy, called the Kingston Big Wheel, will accompany the exhibition, courtesy of the Stanley Picker Gallery.

The video is inspired by Muybridge’s iconic motion sequence and features 300 gymnasts, dancers and athletes creating a chain of human cartwheels. The Kingston Big Wheel forms the final project for No Competition – a series of artist projects exploring the relationship between art and non-competitive sport.’

David Michalek is an artist who takes the concept and techniques of portraiture as the starting points for the creation of his works, on both a large and small-scale, in a range of mediums. While earning a B.A. in English Literature from U.C.L.A., Michalek worked as an assistant to noted photographer Herb Ritts. Beginning in the mid-1990s, he began his professional photographic career working as a portrait artist for publications such as The New Yorker, Vanity Fair, Interview, and Vogue. Concurrently, Michalek began to delve into performance, installation, and multi-disciplinary projects. Since giving up commercial photography in 1998, his work has been shown nationally and internationally with recent public art and solo exhibitions at the Brooklyn Museum, the LA Music Center, Harvard University, Sadler’s Wells, Trafalgar Square, Opera Bastille, Venice Biennale, Yale University, The Kitchen, Lincoln Center and at the Edinburgh Festival at Summerhall with the Richard DeMarco Foundation. He has collaborated on the visual art component of two staged works with Peter Sellars: Kafka Fragments, presented as part of Carnegie Hall’s 2005-06 season; and St. François d’Assise, presented at the Salzburg Festival and Paris Opera. Other film and video work for theater includes collaborations with The Tallis Scholars; John Malpede and L.A.P.D., and with the Brooklyn Philharmonic in a project for The Brooklyn Museum’s “Music Off the Walls” series. He is a visiting faculty member at Yale Divinity School, where he lectures on religion and the arts. David Michalek lives in New York with his wife Wendy Whelan, principal dancer of New York City Ballet.