I’m a little late in posting details of a Special Muybridge issue of the Routledge academic journal Early Popular Visual Culture, for which I was pleased to be guest editor. The contents, in no particular order, are as follows:

This article is a reflection on my own practice and its connection to changing representations of time and movement within photography. In my work as an artist and photographer, I have endeavoured to develop a particular perspective on the relation between the heritage of photomechanical tools, new technologies, memory and space. In what follows, I describe a series of pivotal moments in the formation of this perspective as they exemplify a specific strand of photography, showing how they connect to wider transformations in the field of visual cultures.

Loops and joins: Muybridge and the optics of animation
Esther Leslie

Film is rightly understood to be an art of movement, but stasis plays a role too, from the first films which cranked into seeming life out of stillness to the mechanisms of contemporary animation, which is pervasive in cinema today. This article explores the relationship of stillness and movement in early cinema and pre-cinematic optical technologies, which demand a flick of the wrist to produce movement out of stasis. Muybridge’s sequential photographs found their way into some of these early and later technologies and provided the basis for such demonstration of the emergence of movement out of stillness. If mobility and stillness are concentrated oppositions in Muybridge’s work, so too are the related themes of animation and inanimateness, a partnering that relates less to the analytical dissection of life and more to the evocation of a spirited magic.

This article addresses questions concerning photographic authorship and originality, and how these issues relate to the work of Eadweard Muybridge. The subject of legitimacy concerning the scientific nature of many of Muybridge’s photographs is reviewed, considering his retouching, cropping, and rearrangement of images. The role of the University of Pennsylvania’s ‘Muybridge Committee’ is also discussed.

Eadweard Muybridge’s stereoscopic photographs, published in large numbers before his famous motion sequence series were taken, have had much less exposure, and have been subject to far less research, than his chronophotographic images. This short study of just one of the more enigmatic examples of his stereographs considers some relevant aspects of visual perception, and the circular image, proposing connections between these aspects of Muybridge’s work and the Rotoreliefs of Marcel Duchamp.

Chronophotography in the context of moving pictures
Deac Rossell

This article, originally a talk given at Kingston Museum in 2010, considers the ‘four great chronophotographers’ – Eadweard Muybridge, Étienne-Jules Marey, Georges Demenÿ, and Ottomar Anschütz, and their reputations as ‘inventors of cinema’ – in the context of achievements by lesser known workers including Victor von Reitzner, George William de Bedts, Ernst Kohlrausch, Robert Dempsey Gray, and William Gilman Thompson, many of whom saw a different methodology for making series photographs turn into moving pictures, for different purposes. The article suggests ways in which the story of chronophotography in the context of moving pictures is currently incomplete. 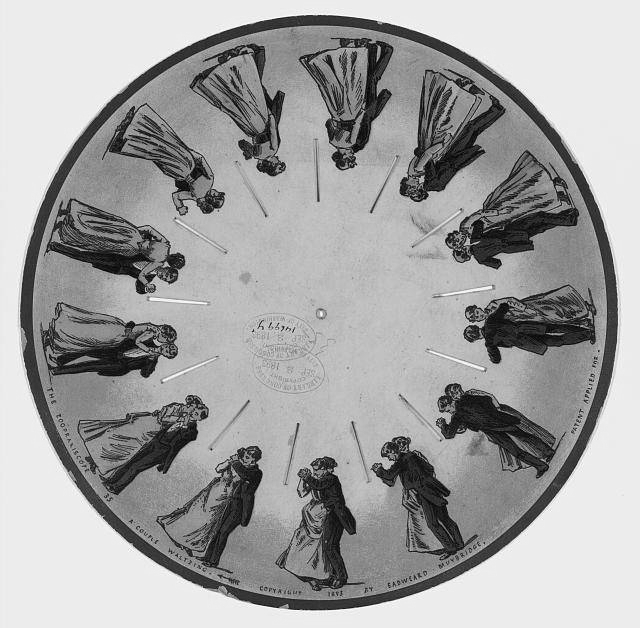