Michael Eklund is growing out his beard for his new role in the upcoming feature about early 20th century photographer and filmmaking pioneer, Eadweard Muybridge.

By Mark Leiren-Young, Special to The Vancouver Sun June 27, 2013

If there was a Leo Award for “best beard,” actor Michael Eklund would have won by acclamation.

Instead, Eklund got to show off his old-style face bush when he recently accepted an award for Best Performance by a Male in a Feature Length Drama for his role in Errors of the Human Body at B.C.’s annual film and television prize party earlier in June.

Eklund was already riding high on the success of The Call — Oscar winner Halle Barry’s surprise box office smash — where he played a serial killer who kidnaps Abigail Breslin (an Oscar nominee for Little Miss Sunshine).

Said Eklund, “Yes, they are both as beautiful and cool in real life.”

Both movies — along with a third film, Ferocious — debuted in theatres in the last three months.

Talking to The Sun in the lobby of the Westin Bayshore during the awards ceremonies, Eklund explained that his current facial fur is meant for his new role in the upcoming feature about early 20th century photographer and filmmaking pioneer, Eadweard Muybridge, which goes to camera in and around Vancouver on Canada Day.

The movie is directed by Kyle Rideout and produced by Josh Epstein, who co-wrote the script. Eklund said the low budget project was love at first read.

“When they first sent me the script I had no idea who they were or who this Eadweard Muybridge character was. After I turned the last page of the script I felt I needed to know everything about this mysterious sweaty-toothed madman, as well as the talented artists who wrote it and sent it to me.

“You do not read too many scripts like this. Every actor knows that feeling when they find it. For me, it was beautiful yet dangerous, soiled and yet whitened. All these words also describe the man who was Eadweard Muybridge. I was ready to sink my own sweaty teeth upon the goal to find out more.”

Currently known as Eadweard, the film will feature over 150 extras, 40 actors, 50 locations, period costumes, animals, children and “a stage coach squished with passion,” Eklund said. “The word ‘collaborative’ sums it up perfectly as the whole community seems to be involved.”

Epstein said that not only did the local film community embrace the making of the movie, the theatre community did as well.

“We’re making a $3 million dollar movie on a very, very low budget so we’ve been getting amazing resources from a lot of the theatre companies in town: The now defunct Playhouse, the Electric Company, the Arts Club, Studio 58, Playhouse Theatre, Chemainus the Renegade Arts Society, and also theatre lighting people and costume people,” Epstein said when interviewed last weekend at the Jessie Awards, where the popular stage actor (last seen in the Arts Club’s remount of The Craigslist Cantata) performed a song-and-dance number celebrating the Vancouver theatre scene.

“It’s sort of a mesh of film and theatre people helping us out. It’s a highly ambitious, epic indie film. Very epic.”

A native of Saskatoon, Eklund recalled falling in love with the movies as a five-year-old when his mom took him to a Sunday matinee, “planting the seed of magic inside of me.”

Determined to perform like his matinee idols Eklund spent the next decade auditioning for school plays — and not getting cast.

Unable to convince the world he was an actor, Eklund enrolled in art school to study painting. It didn’t take long before he was dropping out, packing his stuff and his dreams in a U-Haul and heading West to Vancouver to take a shot at stardom.

Eklund credited persistence and “the power of being so naive” for landing a top agent despite a complete lack of acting experience.”

The agent wasn’t the only one who saw potential — practically every casting agent in B.C. did.

Over the last few years Eklund has been featured on almost every major series shot here including Smallville, Supernatural, Intelligence and Alcatraz.

Eklund saw his latest role as a chance to explore the origins of his passion for moviemaking.

“I discovered that Eadweard Muybridge was a man who could stop time, a man obsessed with freezing motion. His work unknowingly was creating and inspiring the basis for moving pictures. He was the pioneer of film. And without him and his work the actual film we are making based on him could not have been made.” 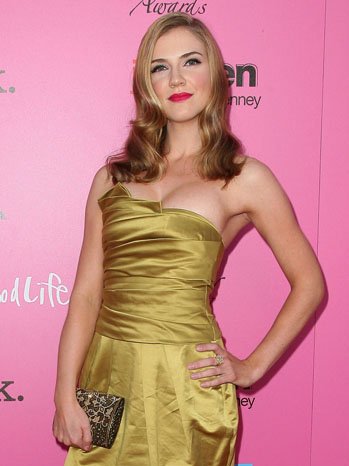 From The Hollywood Reporter:

Michael Eklund is starring in the Canadian indie, which is being directed by Kyle Rideout and produced by Josh Epstein. Rideout and Epstein were behind Wait for Rain, a short that won best science fiction/fantasy at last year’s Comic-Con International Film Festival. The Muybridge project is their first feature. Also joining the cast are Christopher Heyerdahl and Torrance Combs. The movie begins principal photography next week in Vancouver…….

Canning will play Muybridge’s wife, while Balfour will be one of the photographer’s models who became the focus of some of his very first nudes. Tracey will portray the founder of Stanford University who enlists Muybridge’s services to win a famous bet over whether a horse had all four hooves off the ground while galloping. Canning stars in Primeval: New World, the North American version of the hit BBC sci-fi show. Tracey has appeared in the popular Canadian sci-fi show Continuum and appeared in Man of Steel and A&E’s Bates Motel. Balfour is one of the stars of CBC’s acclaimed show Bomb Girls.”

It has been seventeen years since Gary Oldman dropped his feature length directorial debut and cult fave “Nil By Mouth,” but he hasn’t yet followed it up anything. Not that he’s been short of ideas. Back in 2011, he said he wanted to team up Colin Firth for an unnamed remake, while in early 2012 he said he had a project about a sex addict he wanted to direct. Well, the good news is that Oldman does have a new directorial effort cooking, and the surprising part is that’s none of those.
Instead, it’s a biopic of Eadweard Muybridge called “Flying Horse,” and even more, he’s seeking his “Tinker Tailor Soldier Spy” co-stars Benedict Cumberbatch and Ralph Fiennes to star. Penned by Oldman, the movie would tell the story of the photographer instrumental in helping to develop motion pictures. But the movie will focus on the more tabloid part of his life, with Muybridge mudering a theater critic who was had an affair with his wife, and fathered a child in the process. Scandal!

If all goes to plan, Fiennes would take the role of Muybridge, Oldman the smaller role of his attorney and Cumberbatch as the adulterous Harry Larkyns. Scheduling and all that fun stuff needs to be worked out, but the aim is to start shooting in early 2014 (which is also when Cumberbatch is due on the set of Guillermo Del Toro’s “Crimson Peak”).

But it’s exciting news that Oldman is getting back behind the camera, for a story that also inspired an opera by Philip Glass entitled “The Photographer.”

Plate from Eadward Muybridge’s Animal Locomotion: An Electro-Photographic Investigation of Consecutive Phases of Animal Movements, 1872-1885, 11 vol. Author’s Edition folio. Est. $12,000-$15,000. Waverly Rare Books image.More Information: http://www.artdaily.org/index.asp?int_sec=11&int_new=63067#.UbBgsY6t76I[/url]
Copyright © artdaily.org
…
From artdaily.org
http://www.artdaily.org/index.asp?int_sec=11&int_new=63067#.UbBgJI6t76I
…
“Waverly Rare Books to auction Author’s Edition of Muybridge’s 1887 Animal Locomotion. FALLS CHURCH, VA.- On June 20th, Waverly Rare Books will auction an extraordinary photographic rarity – an Author’s Edition folio version of Eadweard Muybridge’s (British, 1830-1904) Animal Locomotion: An Electro-Photographic Investigation of Consecutive Phases of Animal Movements. Initially published in 1887 as an 11-volume set, Animal Locomotion contained a total of 781 plates.
…
Thirty-seven sets were produced and subsequently purchased by major art institutions, museums and libraries in New York, Boston and Philadelphia. The Public Edition of Animal Locomotion contained 100 plates and was issued by subscription for $100. “The subscriber would examine one of the complete sets in a public institution, then chose his or her favorites,” explained Waverly Rare Books’ director, Monika Schiavo. The Author’s Edition, which is the centerpiece of Waverly’s June 20 catalog auction, originally consisted of 21 plates selected by the author or editor from Muybridge’s complete series of animal locomotion plates. Of those 21 plates, one plate (Plate 465) is missing, leaving 20 plates. “Generally, a single lost plate can reduce a book’s value considerably, but in cases where the book is highly valuable, as is the case with this one, the loss in value is nowhere near as great, as buyers would have few – if any – alternatives,” said Schiavo. Citing auction comparables of the past, Schiavo noted that an Author’s Edition with 21 plates, personally inscribed by Muybridge, sold at Swann Galleries in March 2010 for $48,000.
…
A copy of a Public Edition with 54 collotype plates sold for $14,900 at Sotheby’s in November 2008. Its condition was a question mark but “likely to be very poor, given the catalog description that said ‘Fragment only – Disbound,’” Schiavo said. In 2007 an album with 100 plates in faux morocco wraps with some dampstaining, minor handling wear, chipping to edges, and library markings sold for $45,000 – triple its high estimate – at Skinner, while a collection of 50 plates sold at Bloomsbury’s in 2012 for 38,000 pounds (approx. $58,200). Other auction records indicate that some individual plates have sold for as much as $5,000.
…
Described by the Washington Post’s Frank Van Riper as “The Odd Genius Who Froze Motion,” Eadweard Muybridge was one of the most influential and eccentric photographers of all time. His instantly recognizable work merged the art and science of photography in a series of stop-action film sequences that paved the way for the modern motion picture industry. Muybridge’s prescient images have been collected and exhibited by the Tate Gallery, The Corcoran Gallery of Art and the Smithsonian’s National Museum of American History. Waverly Rare Books, a division of Quinn’s Auction Galleries, will offer the Eadweard Muybridge Author’s Edition of Animal Locomotion: An Electro-Photographic Investigation of Consecutive Phases of Animal Movements on June 20, with no reserve and a $12,000-$15,000 estimate. Waverly Rare Books’ June 20 auction will begin at 5 p.m. Eastern time. The preview begins on June 15 and continues through and including auction day (see website for hours). The gallery is closed on Sundays. All forms of bidding will be available, including absentee or live via the Internet through http://www.LiveAuctioneers.com. For information on any lot in the sale, call 703-532-5632 or e-mail monika.schiavo@quinnsauction.com.”
…
Visit Waverly Rare Books online at http://www.quinnsauction.com.More Information: http://www.artdaily.org/index.asp?int_sec=11&int_new=63067#.UbBfwY6t76I[/url]
Copyright © artdaily.org
…
(Posted here by Stephen Herbert)