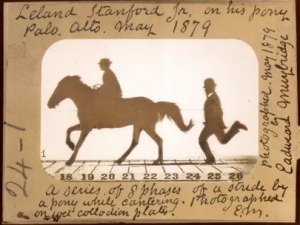 The forthcoming talk by Brian Clegg at the British Library in London will include fifteen minutes of Muybridge animations and image combinations – motion, panoramic, and stereoscopic – by Marek Pytel, presenter of visual wonders . Marek is a masterful animator of these and many other sequence images. More on Marek here:

Brian Clegg is Muybridge’s most recent biographer, and his talk has a similar title to the book: The man who stopped time: Eadweard Muybridge – pioneer photographer, father of cinema and murderer. British Library, Monday 1st February, 6.30pm, price £6. More details and bookings here:

The BBC series A History of the World in 100 Objects uses a photograph of a  bronze statue of Minoan bull-leaping as one of its promotional images. 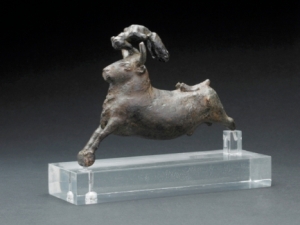 This bronze figurine depicts a man somersaulting over a bull. It comes from the island of Crete and was probably used in a shrine or a cave sanctuary. Bulls were the largest animals on Crete and were of great social significance. Bull jumping was probably performed during religious ceremonies, although a leap such as this would have been almost impossible.

Read about bull-leaping and bronzes here: 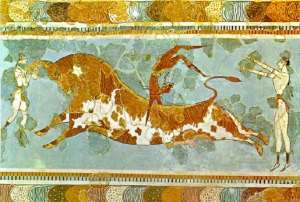 Muybridge’s Zoopraxiscope subjects included a scene of a man somersaulting over a bull, created by combining photographic sequences in his painted creation.

…Mr. Muybridge has succeeded in combining a series of movements which make a very laughable picture. A man is running with a wild bull in close pursuit. After the bull comes a greyhound, and just as the infuriated bovine reaches the man, he throws a back somersault, striking the ground behind both, while the dog seems ready to catch the bull by the tail … It is so realistic that were it possible to do such a feat it could not be more so.
Spirit of the Times (California) 27 March 1880.

Muybridge described this combination technique in his Preface to the 1899 Animals in Motion, but it has been almost completely overlooked or ignored by historians.

It’s often suggested that Muybridge’s Zoopraxiscope was a brave but  failed attempt at cinematography – partly because he projected painted silhouettes informed by the camera, rather than actual photographs. But his technique was more versatile than simply reproducing photographs in sequence on a screen – his projector much more than a primitive cinematograph.

His zoopraxiscopical production method could show a simple silhouette sequence to prove the validity of the individual poses (such graphic representations are today computer-generated), but allowed for far greater imaginative interpretation than a basic series of photographs in motion would have done. In particular, it made possible combined sequences in a single scene – as the “bull-leaping” example demonstrates. Without these combinations there would have been no “Rotten Row” horse scene, no flock of birds flying, no “Three men racing”. Muybridge’s intuition that his Zoopraxiscope method was – for him – the way to go was vindicated by its widely acclaimed reception.

And although it was to be fifteen years after the Zoogyroscope debut before anyone would screen actual animated photo sequences taken in real time (Anschutz’s electrical tachyscope projection model, double disc maltese cross, 1894), in fact the Zoogyroscope/Zoopraxiscope COULD animate photographs – and did, with the posed skeleton horse sequence. It was a fiddly, difficult process – for technical reasons each image had to be ‘stretched’ in a particular way to overcome image compression when projected – but Muybridge proved that this could be done with actual photographs. He did it for this one disc only – because for once, he needed to animate a detailed photo sequence.

But Muybridge’s ambitions were clearly elsewhere – with his painted silhouette combinations. Then, much later and under pressure to get new material for the World’s Fair at Chicago, he took a wrong turning, trying to add colour while retaining his flexible image-combination technique. He was no doubt aware that Edison (and indeed Ottomar Anschutz) planned to have moving photos in peepboxes at the fair, and was trying to do something different from just animating photographs – he wanted to create a herd of galloping buffalo from his photo sequence of one lone animal, add a turbaned rider to his elephant, create a Chicago horse race from several galloping horse sequences and an imagined crowd of matchstick-men – ‘cartoon’ images manipulated and extrapolated from his existing photo negatives. And remember, even then (1892-3) NO ONE ELSE had projected ordinary animated photographs, either* – so for Muybridge to do this as a straightforward production method (i.e. without having to create the specially distorted photographic positives necessary for his Zoopraxiscope), a newly invented machine and a period of experimentation would have been necessary – and he didn’t have the time, or the team.

It seems that Muybridge never did show the later Zoopraxiscope discs of coloured drawings. He rejected them as being a step too far from his published series photographs, by which he wished to be remembered.

[* Note: The 1870s Heyl’s Phasmatrope probably only worked at around 3 fps, so would not have been suitable, and I’m not convinced the 1892 Demeny disc machine could usefully project onto a large screen.]

Copyright. Not to be reproduced.

Even before Muybridge’s zoopraxiscope presentations, some very impressive animations of animals in motion had been produced by others. The Irish artist Michael Angelo Hayes (1820-1877) was responsible for this extraordinary scene for the phenakistiscope. More about Hayes and his unique motion discs another time.

…raises all kinds of questions, not only about how we perceive movement in still images, but also about what art is.

Muybridge set up 12 cameras in a row, and his pictures are surreal successions of static images; Marey invented a camera that could record successive states of movement on the same negative. Their fusions of science and art are slightly monstrous, like Frankenstein’s creature. But as they snap these restraining bands, the exhibition, too, comes alive.

There’s quite a bit of technical stuff to absorb but even if you’re not particularly into all that, this exhibition is constantly enthralling.

On the Move is an engaging, thought-provoking show.

Above: one of the images promoting the exhibition.

More ‘Marey’ than ‘Muybridge’, but I thought it would make a change from the usual Muybridge photos used as headers.

Jonathan Miller’s exhibition On the Move is now open at the Estorick Gallery, 39a Canonbury Square, London N1 2AN –

Although the problem of depicting movement in painting and sculpture had concerned artists for many centuries, the birth of the Futurist movement in 1909 signalled a renewed interest in the subject. Taking as its starting point the Estorick’s own collection of Futurist masterpieces, On the Move draws on a wide range of material in many different media to provide an in-depth examination of this complex and fascinating theme.

Many of Futurism’s pictorial innovations were in fact built on foundations laid during the nineteenth century, when the emerging medium of photography began to reveal previously unseen aspects of reality. The pioneering research of Eadweard Muybridge and Etienne-Jules Marey was of particular importance in this respect.

There’s a brief review and interview with Jonathan Miller here:

and don’t forget to visit The Compleat Muybridge from time to time, too.

With Muybridge’s images being a firm favourite of those experimenting with new technologies and new art forms, comes the news of the Profilograph (after Muybridge), based on one of his galloping horse sequences.

A physical manifestation of motion

Profilography is a neologism describing a technique of drawing through sequential contours or profiles. It derives a three-dimensional form or space through the accumulation of adjacent 2D profile lines. Applied to temporally derived data, such as frames from a film, the extrusion made from the extrapolation of in-between frame data becomes a physical manifestation of motion. Slicing through the extrusion (parallel to the film plane) with increasing depth yields a morphing between frames.

A typical [Muybridge] sequence used twelve cameras at regular intervals to capture one cycle of a horse’s gallop. By cinema standards, this is quite sparse. There is a lot of data missing between each frame. By tracing the Muybridge frames, and working them in the computer through a series of digital operations … the in-between data materializes in a solid model tracing the full motion of the horse’s run. Taking a slice through any point will yield a new frame in Muybridge’s sequence. Since the model is contiguous, there are an infinite number of frames that can be generated from the original twelve.

To physically manifest the digital effects, the digital model is separated into smaller portions [for] a starch 3D printer. The starch parts are removed from the machine, cleaned, and hand-dipped in hot wax … The wax assembly is dipped into a slurry mix of ceramic, silica and binder…. After the final coat has dried, they are flash- burned in a 1700-degree kiln and all the 3D printer starch and hand- applied wax burns out, leaving a hollow ceramic shell. The shells are heated to 1650 degrees, molten bronze (2150 degrees) is poured and the molds are left to cool. Once cool, the molds are shattered, excess bronze is cut away, the pieces are welded together into the final form, sandblasted and a patina is applied to make the final surface finish.

This modern version of the ‘lost wax’ casting technique, combined with a 3D printer (a machine for producing actual physical models from digital information – printing the part layer by layer from a starch-based material until it resembles a 3-D model of the CAD file), enables the creation  of an extraordinary sculpture. It has a precursor in the bronze bird sculptures of Etienne Jules Marey, and is reminiscent of Marey’s overlapping single-plate chronophotographs. Similar techniques are being explored by other artists, including Geoffrey Mann.

PABLO R. GARCIA is the founder and principal of POiNT, a collaborative and multidisciplinary research studio based in Pittsburgh. POiNT is dedicated to experiments in the spatial arts–architecture, design, and the visual and performing arts, in a variety of scales from the portable to the urban. Pablo is the Lucian and Rita Caste Chair in Architecture and Assistant Professor at Carnegie Mellon University.

With thanks to Pablo Garcia for permission to use this image, and his text.

In 1851 or ’52, Edward James Muggeridge emigrated to America, initially settling in New York. In the autumn of 1855, he moved to San Francisco, and about this time became Muygridge.

On 7 November 1856, Muygridge applied for the first stage of naturalization as an American citizen. His name is recorded in the  Index to Declarations of Intention for Citizenship 1851-1906 [ACR 2534535]. [Accessed through Ancestry.com] (The original Index page has his name in manuscript, transcribed as ‘E.I. Muygridge’. The original page number in the Index is: 147. The index entry notes: ‘Bk: 2 page:21’ – presumably the volume and page number of the original court application record.)

In order to become a naturalized citizen at that time, it was necessary to have resided in the United States for a minimum of five years. The first stage of the application (registering intention) could be made after two years, and three years later the final application could be made.

In 1856 Muybridge (to use his more familiar name) had been in the country for four or five years, and had evidently decided to stay when he made the initial application. He was still in the United States three years later (late 1859), at which time he could have applied for the final stage of naturalization. Whether he did or not isn’t yet known, and discovering the answer will require research in the US. (Any volunteers?)

In 1860, Muybridge returned to England. Some time in the Spring (or later) of 1866 he went back to San Francisco.

If Muybridge failed to make the final application for naturalization in 1859, or when he returned after 1866, it may be that he did so before he married Flora (in 1871), as an American woman who married an alien apparently lost her U.S. citizenship, even if she never left the United States. Or at least, her citizenship was held in abeyance (she adopted the nationality of her husband) during her marriage.